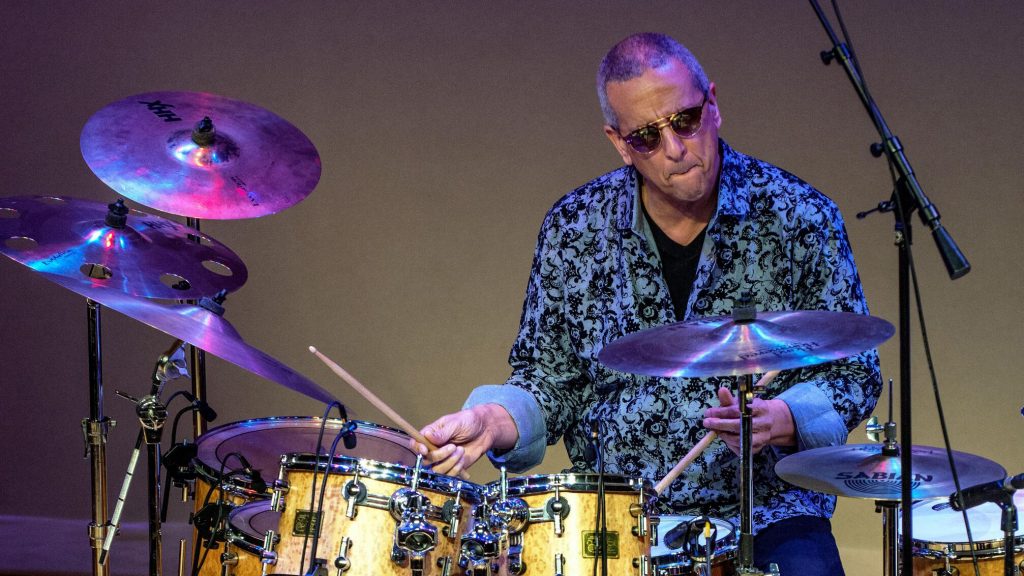 Q: What was your introduction to music? How old were you, and how did it affect you?

A: The music genres I heard most in our home as a young boy were gospel and soul with the blues sensibilities. This was a few years before I started playing an instrument. Little did I know at the time, that listening to those styles would set the framework for how I would FEEL music once I started playing the drums. That soulful foundation was established. The soul, passion, energy and the emotional layers of the blues. I started playing drums around seven or eight years old. When I saw the Beatles on the Ed Sullivan Show in February of 64…seeing Ringo playing in that context… did it for me. I knew I wanted to play drums from that moment on. Not stylistically like him but playing drums and creating music.

Q: Did you grow up in a musical environment?

A: My grandmother sang in the church choir and my mother played the piano in church. I eventually started singing in the choir too. My first musical interaction with other people. I kick myself to this day for not asking my mother to teach me piano back then but for me it was all about the drums. Then in high school I started playing drums with the school band. That’s were I got by first bit of music education and also started playing in a band with some of my school friends. Mostly rock. I never had lessons up to that point but I was great at interpreting what I heard. Seeing things too because it helped me in developing my technique…watching other great, trained players and getting pointers from them.

Q: What styles of music had the greatest impact on you?

A: Firstly, gospel. Then soul. Then rock. The classic concepts of those genres by today’s standards. Jazz came years later. Listening to music was very different back in the 60’s. My friends and I would have listening sessions. We would buy a couple of 45’s and bring them into the sessions and just sit and listen over and over… then talk about what we heard. Musicians and non-musicians were part of these listening circles. It was cathartic. Very different today and as I mentioned earlier those styles played a profound and significant role in how I would eventually play music. The music that means the most to those listening is the music you feel. That’s what connects you. That deep soul is what’s missing, in my view, in much of today’s popular music.

Q: How would you describe musical style?

A: That’s a tough one but here goes. The Americana Groove Projectfor example is multi genre and reflects my many musical influences. I’m having a hell of a time trying to narrow it down to one style. I think years ago the lines were definitely blurred in separating genres. At times, instrumentally, the music was the same between say…blues and rock but the vocal content was different and usually the forms but conceptually they were the same. Often times what was sung helped to define if you were playing blues or rock. Over time rock became more melodic…getting away from traditional blues harmonic structures. I know the blues and funk when I FEEL it…which is different than hearing it. Rock too but rock eventually got away from the elasticity in the rhythm like soul. Listen to and feel Cream as one example and listen to rock today. Totally different in the way the rhythm flows. Rock, like the blues, is guitar heavy but rock tends to use more distortion or effects. Soul…bass and drums. These are simply examples of differences in trying to help define a style but the common thread in the genres…particularly back in the 60’s…was the blues which is an emotional experience. Much of rock today is void of the blues and the elasticity of the rhythm of soul has changed. Straighter eighth notes in phrasing. R&B at its inception was more instrumental and had blues and some jazz at its foundation but repetitive rhythmically. Soul merged blues, R&B and gospel and was more vocal. Pop takes the lowest common musical denominators of the aforementioned genres and is produced for the sole purpose of making a hit record. Your question is complex and trying to answer without getting into musical descriptions is tricky.

Q: When did you learn to write songs and what was that process like?

A: One of my best friends, saxophonist Abdu Salim, was my first “jazz” harmony and theory teacher. When I was in college I was exposed to a different kind of theory but jazz theory was what intrigued me. This was coming into the early 80’s and at this point I was playing jazz. He was in the ARMY and taught at the Armed Forces School of Music. He and I started playing together and he would always say to me…”just because you play drums doesn’t mean you should get a pass on having to learn harmony and theory.” He would bring me books from the school and I would study deeply. He’s also an amazing writer. I learned a tremendous amount about composition from him. Being a drummer too help to spur on my desire for composition. Drummers in popular music are basically time keepers. Not much creative freedom. I got tired of the repetition and limited creative possibilities and started to develop my own ideas but I realized that if I was going to be able to play drums the way I heard it in my head, I had to learn to write my own music. The first time I played my music with a band was unbelievable. One of my dreams was to play my music with a symphony orchestra and we did a couple of years ago with the Virginia Symphony. That was truly amazing!!! I’m playing my ideas and developing my style and sound. It’s incredibly therapeutic writing and was/is immensely rewarding and spiritually and emotionally fulfilling when I get the opportunity to play my music with other musicians.

Q: Which of your songs on The Americana Groove Project are most personal to you and why?

A: Each song is structured over a specific and thought out groove or beat so they’re all unique and special to me in different ways. Conceptually, Higher Calling is one because it reflects much in how I view my faith. Slights and Slings is another because of the groove. I love that groove and it reflects this rhythmic elasticity I was speaking of earlier and is reminiscent of some of the first grooves I every learned. I love how the song develops too. I’m a firm believer in that a song has to move forward in it’s energy and purpose. Midnight Jam was a blast and it came together after a long night of recording. It wasn’t in the plans. My bass player Terry Burrell and I, would occasionally mess around with that groove over the years. Never did much with it…until that night. We were exhausted and after we were done recording, I just started playing that groove. Then Terry came in and then the rest of the band. Little did we know the engineer still had the tape rolling and I’m glad he did. We were just jamming and having fun not knowing we were being recorded. Talk about in the moment playing. It’s also important to note here, I wasn’t planning on singing. This is one of the most important things for me about this project. I asked three singers and they all said yes at first and then mysteriously, at different times, all said no. Without EVER hearing a note of the music. We never got together. It was the strangest thing and after some deep moments of contemplation, I said I will try it. I never sung lead before in any capacity. It was a crazy thought in my head but in the end I’m glad I did it. I sang backup in a band and in the church choir when I was young as I stated earlier but never lead. So when you ask which songs are the most meaningful to me…ALL the vocal tunes 🙂 I’m proud of how they turned out.

Q: What artists influenced you the most growing up?

A: Many…for different reasons. The Reverend James Cleveland for his passion. Ray Charles for his soul. Just about any of Motown’s artists for their commitment to excellence and organization. James Brown and Clyde Stubblefield for their funk. Stax Records artists such as the Bar Kays, Issac Hayes and Otis Redding. Whew! Unbelievable soul! The Meters out of the Crescent City. John Coltrane for his power, technically facility and the intense spirituality he injected into his music. Drumming greats Tony Williams, Elvin Jones, Art Blakey, Philly Jo Jones, Jack DeJohnette, Vinnie Colaiuta, Steve Gadd, Steve Smith, Buddy Rich and many, many more for their extraordinary artistic brilliance and inventiveness.

Q: How have you evolved creatively?

A: I evolved into appreciating and respecting space and patience. I realized after years of playing the one thing that means the most to me is how it makes me feel and how I can make what I play feel. It’s not the technical virtuosity. On some earlier recordings it was about “choppin” and I was left emotionally empty. It was fun and I was intellectually stimulated but little stuck with me. I go back to the records that make me feel good. Even my own and that’s the beauty of The Americana Groove Project. How it makes me feel. It has an old school sensibility but with modern touches.